Breaking Boards and Breaking Through Barriers 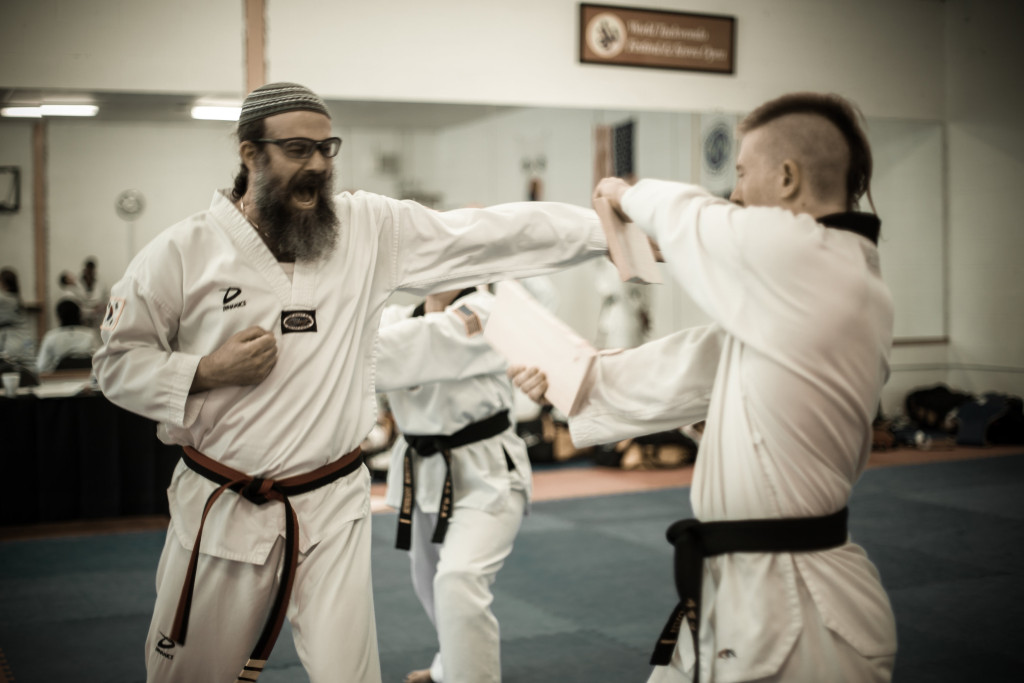 In my Tae Kwon Do studio, when a person tests for their next belt level, the final stage of any test is to break wooden boards. Each level has its own specific breaks, certain kicks or punches with which to shatter the pine. It is inspiring to watch and fun to do. A person gets a lot of satisfaction from solidly connecting with the board, and sending some splinters flying. There is a profound sense of accomplishment when you use your own, unaided strength to do what seems like it is beyond doing.

The board breaking comes at the end of a fairly arduous test, and by that time, we have already spent more than a full hour exerting our energy with kicks, punches, one-steps, pumsae, and sparring. It is not easy to muster the necessary strength and precision for breaking the boards. Sometimes, a student will deliver the blow, and the board won’t break. They kick again. Nothing. They try again, and still, the board remains whole. This is not unusual, nor does it disqualify you. You simply have to keep on trying until you successfully meet the challenge that the board represents, until you literally break through the barrier to the next level.

Does breaking the boards hurt? After all it is solid wood, and our fingers and toes don’t seem so fierce. Breaking the board does not really hurt, but hitting it and not breaking it stings pretty bad. It is a painful reminder that you didn’t hit it right, and a let down of the spirit, that you didn’t get that immediate positive response that lifts your confidence.

But you have to keep on trying. No matter how many times you don’t break it, you refocus, recommit, and kick again. If you miss a few times in a row, the Master will remind you to deliver “more power”, or “You’ve got to HIT it.” People who are watching or also testing, might call out “Come on, you can do it.” But nobody jumps in and breaks it for you. We all recognize that part of the test is meeting standards that were previously beyond your abilities, and that the greatest satisfaction and self confidence comes from doing something you couldn’t do before.

This is an essential part of any practice, TKD, other athletics, art and music, and certainly prayer and spiritual disciplines. Good teachers, and fellow community members will encourage you, but they won’t do it for you, or take away the difficulty of the challenge. They realize that this does not really help you, and in the end takes away from you the real satisfaction that comes from accomplishment.

Recently in synagogue, just before the beginning of the Torah reading, I was standing in the middle of the sanctuary, and since I did not have my Chumash (Hebrew scripture) in my hand, I announced the Torah portion by name and location in the Pentateuch instead of by the page number. This has often been my way, as it requires the members of the congregation to work a little bit to find the passage, and to become familiar with the traditional order of the portions and the flow of the literature. Yes, there are page numbers, but they can be a crutch, and I expect my congregants to become more fluent with the Torah as they grow in their learning.

So I gave the parsha citation, and immediately two of the parishioners called out the page number. Now you need to know that I have talked with these guys many times about calling out in services, or announcing pages, but they did it anyway. So this time, I called them out, and said; “Why would you do that? The people here are capable of finding it themselves. Why would you take away the struggle and the challenge? Don’t do it for them, or they will not learn to do it for themselves.”

I know they were trying to be helpful, and I suspect they will dismiss my reproach. But I also know that however helpful they were trying to be, they actually stood in the way of others making progress. By trying to make people comfortable, and by removing some of the negative experience that comes from feeling lost in shul, they perpetuate those feelings, and end up discouraging the members of the community from discovering the deep reserve of strength and knowledge that can be theirs.

We seem more willing to let kids “try, try again” but when it comes to adults, some people think its best to spoon feed them rather than encouraging them to struggle and strive, and fail on their way to greater strength. Playing to someone’s weaknesses and shortcomings, only serves to emphasize those weaknesses, whereas playing to someone’s strength, reminding them to use more power, emphasizes the power we all have to achieve mastery.

What good does it do the student to break the board for them? None. Calling out pages does not help people become better in their shul practice. Jumping in and making sure they feel comfortable, only reminds them that they feel UNcomfortable, interrupts their experience, and stunts their growth.

Sure it stings when you miss. So use more power, kick again, don’t miss, and break the board. Of course it feels bad to lack knowledge and expertise in our spiritual practice. So learn a bit more, find the right page, and break through the barriers.

If you are going to shout something out in shul, don’t call out the page numbers. Instead try this: “Come on, you can do it, keep on coming.”