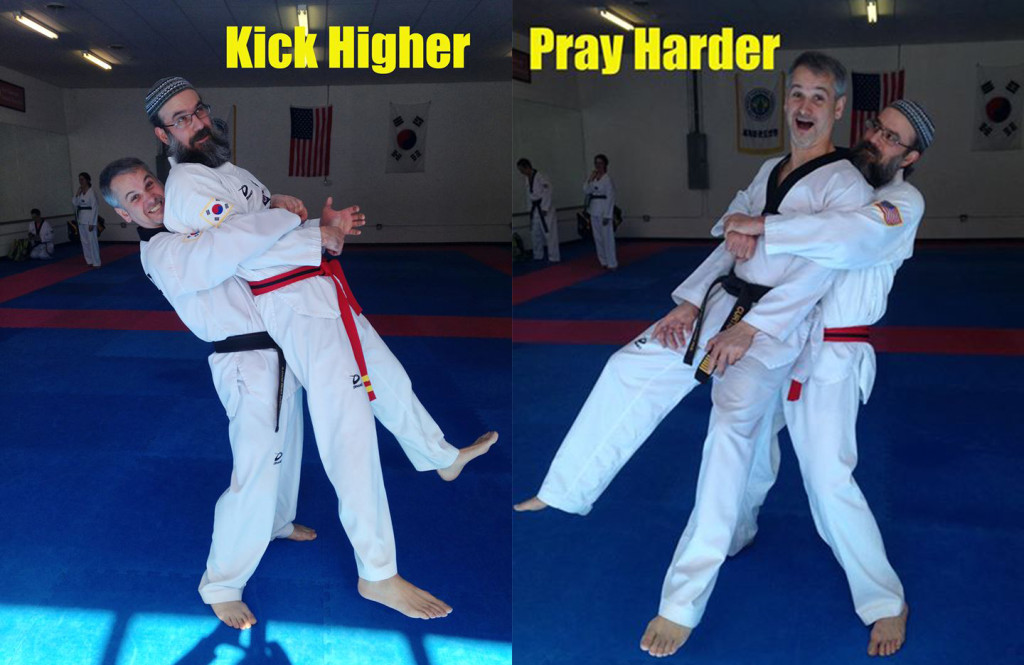 I felt bad for her at first.

We were barely five minutes into the Tae Kwon Do belt test, and the Master called her out by name. The test begins with everyone demonstrating basic kicks and blocks. Everyone there knows how to do them. Master M is looking for the quality of your form, and your energy. “Mary*” he said, in a stern voice. Mary is a young girl, not quite a teenager and not quite a little girl. “Mary, I am only going to say this to you once, and then I am going to ask you to leave.” Wow. Master M is usually not so hard on you, I thought. What could it be? “You have got to kick higher.” I got the impression, and later it proved to be true, that this was not the first time, he had called her out on this. Tae Kwon Do is a lot of kicking, and Master M always tells everyone to kick higher. But Mary had a persistent thing with what I would call wimpy kicks.

We continued kicking, and within just a few minutes, I saw him give her a very serious look, and tap his pen, impatiently. I knew without having to see it, that she was not kicking high enough and that the pen tapping was for her.

I felt bad for her.

My kids take TKD lessons too, and my heart would just sink if Master M had talked to either of them in this way. Was she really going to get dismissed from the test? Generally, in our TKD studio, you don’t get asked to test unless Master M thinks you can do it. The point is not to set you up for failure, but he sometimes reminds students taking the test, “This is a test, you CAN fail.” We continued to demonstrate our kicks.

So, she could kick higher. What was going on? Why was she repeatedly kicking low and lazy?  This was not her first test ever, and she was certainly able physically to put her foot up to the proper height.

I felt a little less bad for her.

“I will give you every opportunity to succeed here. But I will also give you a shovel and let you dig yourself into a hole if that is what you choose. If you couldn’t physically kick any higher that would be okay. But its not that you can’t, its that you won’t, or at least aren’t.”
I was starting to see where he was going, and I felt my sentiment shift almost completely.

“I can only teach you how to do it. You must accept my teaching in order to actually move ahead” he said. I was done feeling bad for her. Not that I wanted her to fail, but I know Master M well enough to know that there is a life lesson in this moment, not only a technical lesson about the kicks of TKD.

“Sit down”, he told her. And then he turned to all of the students who were testing.

“It may seem to you, like it’s just a kick. No big deal” He began. “But it is not just another kick. It is a standard that you set for yourself. And every time you come to class, every time you spar, every time you test, you have to hold yourself to that standard. TKD is not about setting low standards for yourself in class or beyond. It is about reaching up to a higher standard, maintaining your best standard, and then trying to push higher and better.”

Mary finished the test. So did I. I must have told the story five times the next day; at our synagogue staff meeting, in my davening class, to friends. It made a strong impression on me, and I think there is a davenology message in it that is terribly important.

*not her real name.