What Mountain Climbing and NASA Can Teach Us About Boston 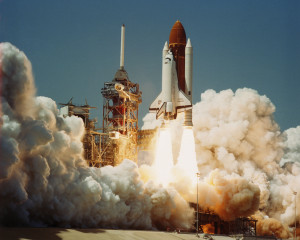 I don’t usually write about current events on this blog. My main purpose is to write about prayer and creativity, and how we learn these things. But I have been taken by a few of the more common reactions to the murderous attacks in Boston last week, and feel like the Davenology approach can perhaps offer some insight into moving forward.

One of the things I heard in the immediate aftermath was a comparison to Israel. It happened that marathon day and Israel Independence Day coincided, and many of my colleagues and friends noted that with this occasion, America had a taste of what Israel lives with in every day life. Random acts of terrorism are not foreign to Israelis and they come to all such public events with a profound awareness of the potential for a large gathering to be seen as a soft target for terrorists.

The other thing I heard a lot of was an expression of fear and a sense that people’s feelings of safety had been shattered. “I don’t feel safe anymore.” Hearing both of these tropes over and over I began to really question why they were so pervasive. I felt when I heard people say that they did not “feel” safe, that there is an important distinction between feeling safe and actually being safe. In truth, we were actually no safer the day before the marathon than after, but the attack changed the way people felt, not the truth of how we live.

All of this brought me back thirty plus years to the summer of 1982 when I spent a summer volunteering in the Israeli town of S’derot. S’derot is not a remarkable town, except for its proximity to Gaza and its status as a popular target for rocket attacks from Palestinian terrorists. If it were not for the sheer number of these attacks, most people would not have ever heard of S’derot. It has a small population, and when I went there it was even smaller. But S’derot is the sister city of Rochester, NY where I grew up, and our Jewish Federation has a long relationship with it. In 1982, together with a high school friend, I volunteered to work at the municipal summer day camp for children located at the community swimming pool in the center of town.

Looking back on it, we were in a bit over our heads. Most of the other counselors at the summer camp were young female soldiers, fulfilling their army service through the education and service corp. We were the only Americans working there; in fact we were the only Americans in S’derot that summer. Our Hebrew was okay, but not great, and we were a long way from the shelter and comfort of our upstate homes.

On the first day of orientation for the staff, a soldier came to make a presentation to raise awareness of the threats that existed for the camp. In the years prior to the tightening of border defense with Gaza, infiltration was far more common than rocket fire, and terrorists used explosive devices placed in person to create fear and destruction. The soldier showed us various different ways that the terrorists constructed and hid bombs in order to make them as devastating as possible. Among all of the different methods, one stood out to me and shocked me out of my naiveté. He held up a little toy doll that had been used to disguise a shrapnel-filled bomb.

Wow. This was incredible. Who would so such a thing? A doll? What little kid would not pick up a doll? It was hard to understand that this was the reality with which the residents of S’derot lived. But surprisingly, I did not feel any more threatened or any less safe than I had before. His explanation and his devotion to helping others be aware of and prepared for the actual threat had not heightened my discomfort or anxiety. Instead, I simply felt a little more prepared to do my job and take care of the young children of my summer hometown.

We all know that the threat is real, and we all know that large gatherings like a sporting event or a synagogue present a soft target for people determined to harm and sow terror and fear. That is why they check your bag at the ball game. That is why synagogues have armed police officers at services, and that is why the local and federal officials use bomb-sniffing dogs to check the route of the marathon before the race starts. Knowing the risks and being aware of how they might play out is an essential part of living and surviving in a dangerous world.

I am currently reading a fascinating book that on its surface seems to have little to do with Arab terrorism in Israel, or domestic terrorism in Boston. The book, titled Deep Survival by Laurence Gonzales is subtitled Who Lives, Who Dies and Why, and this is essentially what he writes about. The culmination of years of research, Gonzales looks at wilderness survival stories and tries to understand why some people survive seemingly unsurvivable events, and why others die in circumstances where others live. In one of the chapters, he tells the story of four amateur hikers who attempt a climb up Mt. Hood in Oregon. This is not a beginner’s hike, but these untrained men were convinced that it was easy enough for them to do it, and they had a safety plan that gave them the confident illusion that they could handle whatever came their way.

Unfortunately, the very thing that makes you rich sometimes makes you poor, and when the men found themselves hanging, literally from a rope, tied to each other, the over protective safety plan they had developed ended up bringing them down together with two other climbers from another party, and sending them all to their death in an icy crevice. Like many dangerous situations, their willful ignorance of the risk, and their overblown reaction to that risk, only served to increase the danger and their susceptibility to it.

In the US, I believe, we have also reacted to the very real danger of terrorism and crime in an overblown way. The Patriot Act, the rush to institute extensive gun control, take off your shoes in the airport, spy drones and more all in response to what is a very small likelihood of being harmed in an act of mass violence or terrorism. Gonzales demonstrates that the climbers would have been safer (though would have FELT less safe) had they tried to descend the mountain with no safety measures at all. Citing two scientists – Charles Perrow and Per Bak – Gonzales insightfully relates how complex systems and layers of safety efforts do not remove the inherent nature of complex activities.

Perhaps those men should never have even attempted the climb. In hindsight we can easily say they were foolish. But thousands of people climb Mt. Hood each year, and there is a very small, but regular and predictable number of deaths each year. While none of us has to climb mountains for recreation, and it is perhaps best left to well-trained experts, all of us have “mountains” in life that we must climb if we are to live meaningful and significant lives. If we are to do anything worthwhile in life, we must acknowledge an ancient truth and wisdom, that human beings are complex and that the systems of community and society that we create are also complex. And that in complex systems, accidents, harm, and tragedy are inherent parts of the experience.

Of course most accidents are small, giving us the false impression that all accidents can be survived. Gonzales compares the Mt. Hood accident to the devastating destruction of the two space shuttles -- Challenger and Columbia. Space travel is probably the most complex and dangerous of all human endeavors. The various shuttles flew hundreds of missions, and something small failed or malfunctioned on nearly every one of those trips. But most of these failures were manageable and never rose to the level of tipping point crisis. But there was always the chance that this mission would be the one. Every astronaut knows that these risks are present and yet they not only want to go, they fight and dedicate tremendous personal sacrifice to go.

Feeling safe is not the same as being safe. To feel safe we must close our eyes and pretend that the real dangers do not exist or else we must simply never attempt to do anything of meaning or significance -- never fly, never run in a race, never swim in the municipal pool, never shoot a gun, never climb a “mountain,” or ride a bike. To be safe, however, requires that we open our eyes, recognize the dangers, understand them and prepare ourselves mentally and physically to meet them when they come.

We all deserve to live without fear, but that is not the same as living without danger. Fear can only be overcome through knowledge and training. Danger is an inherent part of God’s incredible world. This risk and this complexity is likely what gave life to the world in the first place.

Reacting is not the same as responding. Reaction leads to misguided attempts to create complex safety systems that only give the illusion of safety, and likely creates new pathways for dangerous accidents to happen.

Gonzales points out that the very best minds in every field of science will scour the details of the shuttle accidents for lessons to use in the future, and will recommend new safety protocols for NASA, but that none of these will actually eliminate the danger of space travel and that some of them may actually be responsible for future malfunction and disaster.

Responding is what makes us human. The capacity to choose, the ability to recognize and prepare for what lies ahead gives us hope and allows us not only to be safer, but as a result of our honest assessment and our eyes wide open awareness to live a full and meaningful life free of fear, and driven towards great accomplishments.