When is the Race Won? 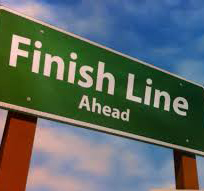 I often like to begin a discussion of tefillah* with a simple question that almost anyone of any age can understand. I stay away from all the specific questions about what a particular poem or prayer means to you, and leave till later questions about God and belief, and instead just ask: “When is the race won? At the beginning? In the middle? Or at the end?

So, when is the race won?

Well, we could say that it is clearly won at the beginning. Consider that the greatest concentration is focused on the beginning. Runners and swimmers practice their starts over and over and over again, only to shave a few microseconds off this extraordinarily important part of the entire race. Drivers compete hard in qualifying heats, only to grab a sliver of an advantage with the pole position, and recognize that such an advantage can not easily be made up by the other drivers. Racers know that if you have a weak start, it is almost impossible to finish in the lead group. Races are won or lost in the first few milliseconds of the event, and the way we start our efforts often determines nearly everything about our experience.

Speed and power are the principle qualities that are more vital than any others. This is true in so many parts of life that we often fail to even notice it. But it has given rise to expressions like “you never get a second chance to make a first impression.” Every teacher, mentor, coach, or trainer knows that when a student shows up at the beginning of the lesson with a lousy attitude they are unlikely to turn it around during the practice, and finish differently than they were at the beginning. If you start behind, you end behind.

We do not end the race immediately after the start. If everything hinged only on the beginning, there would be no point in even running the race. If how we leave the starting block determines whether we win or lose, why not simply end our run after the first few strides and declare a winner based on who is ahead after the runners reach their full stride? Of course, this is ridiculous, because we all know that leads change and change again during the middle of the race. While the start is crucial, it is not, in the end, determinative. Though you have a lot more to overcome when you begin poorly, nonetheless, you CAN overcome it. This is why every coach teaches their players to NEVER GIVE UP. In the middle of the race anything can happen. Fortunes change, injuries occur, new depths of perseverance emerge from the body of the effort, the heart of the struggle, and it is not only a good beginning, but the ability to translate that beginning into a lasting lead that really determines the victory.

Even from a raw emotional perspective, the middle of the race requires the greatest effort, and therefore induces that greatest number of failures. Everyone is excited at the beginning of the race. Every competitor steps into the starting line-up with their heart and chemistry pumping excitement and clarity and focus throughout their bodies. Nerves and muscles are on high alert, and there is practically no laziness at all. The same is true in the final push to the victory line when the end is in sight. In contrast, in the middle of the race, the runner must sustain and harness the energy necessary to maintain a winning pace against the relentless forces of inertia and decline. The racer has to withstand distractions, injuries, pains, and a wide range of body chemistry working to slow him down as the initial high of starting fades to the sluggish pull of gravity and fatigue. And there is also the ever present awareness of place. At the beginning, everyone is in the same place, and no one has or challenges the lead. There is no advantage and no need to make up lost ground or keep hold of position. But in the middle of the race, all of these challenges work to winnow the field of competitors, and it is in the full belly of the race that the racer must encounter and defeat these obstacles in order to win the race. In the depth of the conflict and the heart of the struggle the winners and losers are chosen, and perseverance, not only speed and power determine victory.
In our case, victory is not defined by a finish line, or a ribbon or a medal. In most spiritual practices the real "destination" is a life long process and progression. There is no "end" to an evolving practice of discovery. Still, the analogy to a race is an apt one for anyone seeking a creative spiritual practice. When we think of who wins the race, who is able to achieve what they set out to do, we must certainly, at some point think of the end. Though we are all in a process of improving our religious life, we do set goals for ourselves, experiences we wish to have that are the purpose of our prayer life or creative endeavor. Expression like "at the end of the day", or "in the end", or "the bottom line", "when all is said and done" all indicate something any competitive athlete knows deeply - there is only one statistic that matters. Who is ahead at the end of the game or race. Our competition in creative and spiritual matters is not with others. We are not trying to out-worship or out create anyone. Instead it is a race against all of our inner obstacles and assumptions, and monsters.

In order to succeed in developing these kinds of creative abilities, we must run hardest at the end of the race. Precisely when we have fallen into a steady pace, when we have gotten comfortable in our middle of the race assumptions and acumen, when we have gotten routine and lost the start-of-the-race youthful energy; precisely when we are beginning to tire of life's wonder and meaning, we grow by redoubling our inner efforts to strive for and enhance our goals and aspirations.

At the beginning of every journey there is a line. a moment when, whether we are aware of it or not, our energy shifted in favor of the journey and the race was begun. At the end of every race there is a line, a fictional border waiting to be crossed. A new beginning disguised as a destination. The race is really only won for a fleeting moment. Success depends on a strong beginning, middle, and end. As soon as one record is broken, we can continue to strive and reach and cross lines.

*for those of you who don’t recognize this word, it is Hebrew and is the word used for traditional prayer. In davenology, it does not carry the same sense as the English word prayer, which has a connotation of asking for something. In Hebrew, the word for this is bakashah and it is also one of the basic forms of jewish meditation. But tefillah, is a word that has an interesting linguistic shading to its meaning, and it connotes here the practice of Jewish recitation and meditation, that is the core canvas for my writings. It is also frequently used in the sense of self-discovery. This is because of its Hebrew grammar which is reflexive (to pray=l’hitpallel means to define oneself) and because it is, I believe the purpose of tefillah, namely to deepen our understanding of who we are, and to discover ourselves and our connections to the universe we inhabit.